Playmakers is quickly becoming a favorite hangout on Royal Caribbean ships… and for good reason. What’s not to like about a spot where you can grab a beer, shoot some pool, be surrounded by TVs showing sports and eat some great food? If you haven’t visited this sports bar on a cruise yet, then you’re in for a treat. Not every Royal Caribbean ship has them just yet, but they are being added to many during refurbishments and newbuilds.

To help you prepare for what to expect and what you know, we cover everything below.

Above all, Playmakers is a sports bar. Step inside and the first thing you’ll see are seemingly dozens of TV screens showing all types of sports. Put simply, if there is a game on that you want to watch, then there is no better spot on the ship or that we’ve seen on any other cruise line.

We’ve cruised and visited Playmakers during a weekend in the fall. On Saturday there were multiple college games going, with fans for each team sitting around their respective games. Depending on who scored, there were huge cheers or groans.

On Sunday, the place had multiple NFL games going — including the afternoon and evening games — that drew tons of fans. In short, if you’re worried about missing a big game because you’re taking a cruise, it will be showing at Playmakers.

And even if it’s not football season, there are sports shown around the clock.

In addition to the TVs, there is a full-service bar with beers on tap, cocktails, and more. There is also a menu of food with burgers, wings, nachos and other bar food.

What Sort of Food Is Served? What’s on the Menu? In general, the fare is your typical bar food that you’d expect at any neighborhood sports bar. There are nachos, potato skins, wings, burgers, and a chicken sandwich.

On one cruise, we tried the Poke Nachos, which were nachos served with ahi tuna, avocado, and sriracha. That’s not something you’d find at most sports bars (it was delicious, by the way).

In total the menu isn’t that large, but it hits all the high points of what you’d expect while watching a game.

How Much Does Playmakers Cost?

If you want to watch the game, it’s free to have a seat in Playmakers. You only have to pay for food and drink while you watch. (We did see people bring in food from other parts of the ship.)

Prices are reasonable for what you get. We saw someone with a massive plate of nachos that costs only $8. The Playermakers Burger includes a double patty, bacon, onion rings, and all the trimmings — plus fries — for only $9.

Keep in mind there is an 18% gratuity tacked onto your bill.

Beers and cocktails are inline with what you’ll find on the rest of the ship. Beers run between $7-8 each. Crafts and international brews are 12 ounces while domestic and drafts are 16 ounces. Cocktails were $13 each.

We’ve put the full Playmakers menu below. Note that prices may vary, especially with rising food costs. You can also see a menu on Royal Caribbean’s website. 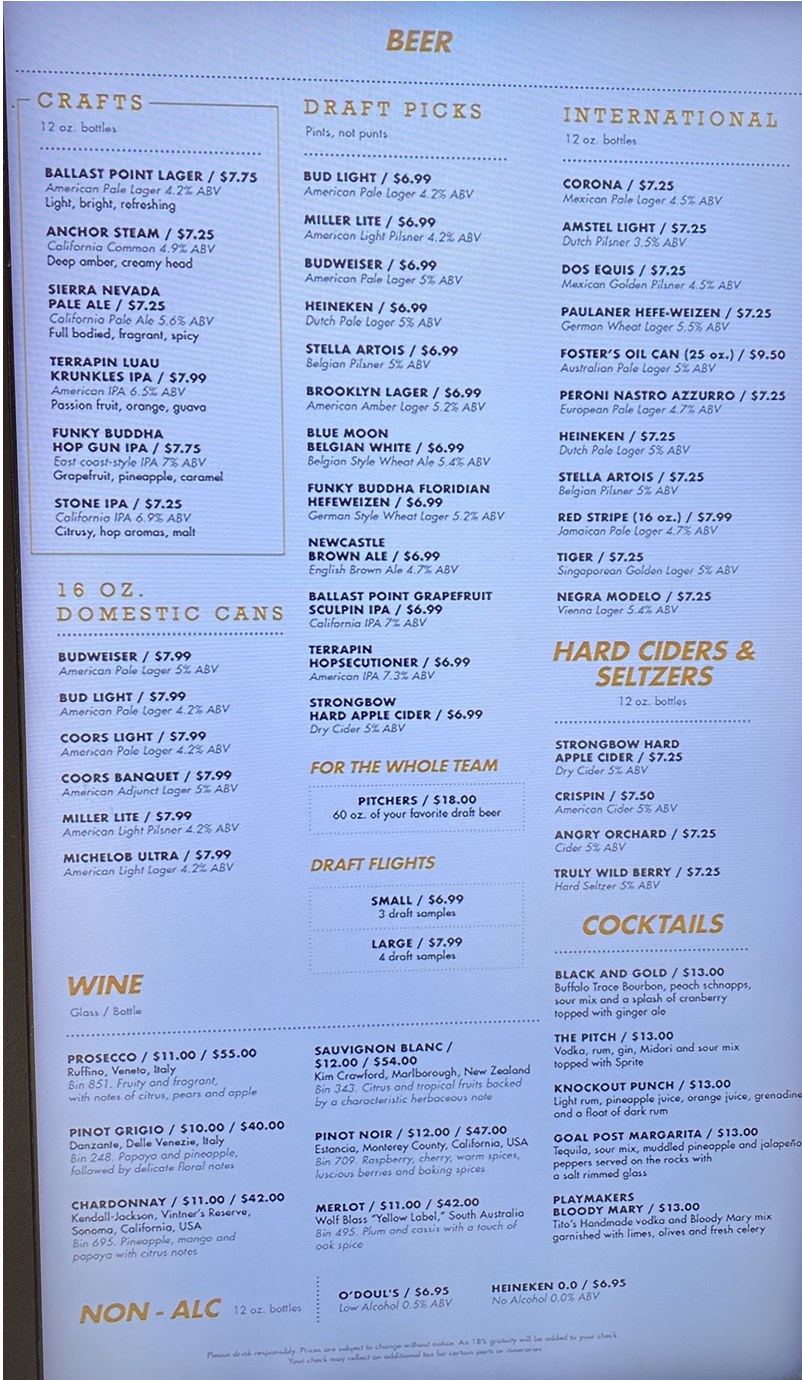 What Is There to Do at Playmakers?

Of course, the focal point of the spot is the TVs, but there is a lot more to the place. Depending on your specific ship, you’ll find pool table(s), shuffleboard, foosball, and arcade games.

So you can have a drink and watch the game. You can have a burger and play a game of pool. You can play some arcade games with the kids. Or you can just hang out and shoot the breeze.

Whether your hungry, thirsty, looking for something to do, or just want a spot to lounge and relax — you can do it at Playmakers.

When is Playmakers Open?

The open times for service will vary, depending on whether the ship is at sea or in port. Playmakers is always “open” in that you can go in an have a seat and watch the TVs, however, it may not be serving food and drink.

So while it’s not serving around the clock, it is open and serving most hours of the day.

Do They Show Sports Not Available in the Cabin?

Yes. You’ll find that with the number of televisions in this spot, there are way more options than what you’ll find in your stateroom cabin. So if you really want to watch a certain game, it may not be on in your cabin, but likely will be showing at Playmakers.

Do I Have to Buy Something if I Hang Out?

No. There is no admission fee to enter Playmakers, and you don’t have to even buy anything if you want to hang out and watch a game, play pool or do anything else. Just like other lounges on the ship, you can come and go as you please.

However, if you’re hungry or thirsty, then items are available, and at prices that are fairly reasonable for what you get.

Is There an Age Limit to Enter?

This answer is a little fuzzy. Royal Caribbean’s website lists an age restriction of 21+ for North American sailings and 18+ on other sailings. However, their marketing photos also show a father and son playing games in the arcade.

To be sure, we’ve never seen anyone denied entry and have seen kids under 21 enter to hang out and watch the games. Our take? If your kid isn’t doing anything wrong (e.g. underage drinking or bothering other guests), then it shouldn’t be an issue at all for them to hang out and watch a game with an adult.

Are There Any Signature Items I Should Know About? If you’re with a couple of friends, then we suggest that you try the Touchdown Sundae (pictured above). It has five(!) scoops of ice cream, caramel, chocolate syrup, sprinkles, wafer sticks, and it’s all served in a mini football helmet that you get to take home with you.

When it comes to over-the-top desserts, it’s tough to beat.

What Else Should I Know about Playmakers?

2. Also, unlike your favorite spot back home, the sports bar won’t have every game possible. Games that play on niche channels like ESPN-U or the SEC Network may not be available on your sailing.

3. Right now Playmakers is on only on some ship ships, including Oasis of the Seas, Symphony of the Seas, Odyssey of the Seas, and Mariner of the Seas. If you’re sailing on a newer ship or one that’s recently been refurbished, then it’s likely aboard. Older ships may not have it.