Cruising from Miami? you can’t start your vacation without getting to the terminal first!

Luckily, there are a number of easy ways to get to the Port of Miami whether coming from the Miami International Airport, the Fort Lauderdale-Hollywood Airport, or other points in the area.

Expect the trip to take about 10-15 minutes to get from the Miami airport to the cruise port. Trips take 35-60 minutes from Fort Lauderdale to the Miami Cruise port, depending on traffic.

Here is a map showing the cruise port in relation to the Miami airport:

Driving Directions to the Cruise Port

Coming from north of Miami: Take I-95 South and exit 2B-US1/Bayside Blvd. Head south to Northeast 5th Street and turn left. Fifth Street will lead onto the Port of Miami bridge. Continue over the bridge and follow signage to designated terminal.

Coming from the south: Take I-95 North and exit at Northwest 2nd Street. Head straight to Northwest 5th Street and make a right. Fifth Street will lead onto the Port of Miami bridge. Continue over the bridge and follow signage to your terminal.

If you’re flying in for your cruise, or simply don’t want to worry with the hassle and expense of parking, then there are plenty of transportation options to get to the cruise terminal in Miami.

Below, we’ve covered the main options to get to the cruise port, along with estimated prices. Keep in mind that prices can change.

Not sure which option is best for you? Below we’ve covered each, including our favorite recommendations.

For most people, we recommend using Uber or Lyft as they are among the cheapest and most convenient options. If planning to stay in a hotel, then we recommend a Miami hotel with a cruise port shuttle.

An Uber/Lyft fare from the Miami airport to the Port of Miami would run approximately $20, compared to $27 flat-rate for a taxi. If flying into Fort Lauderdale, the fare is around $45 to the Miami cruise port, compared to roughly $75 for a taxi. Keep in mind these rates are per car, not per person. So a couple traveling together pays the same as taking the ride solo.

Why do we like using Uber/Lyft to the port? For one, they are less expensive than many other options. We also like the convenience of being able to call a car when you are ready instead of being on a tight schedule.

For more details and rates on using rideshare services to get to the Miami port, read our article here. It includes rates from a number of spots around the area, and more details on using the service.

Hotel With Shuttles to the Port (Recommended)

There’s no arguing that South Florida is the cruise capital of the world. With millions of passengers sailing from Miami each year, hotels cater to them by offering perks like shuttles to the cruise port.

Often these hotels offer free shuttles, or shuttles that are free with a hotel package. There are also a number of Miami hotels near the Coral Way trolley, a transit route offering free transportation to the port.

See our full list of 30+ Miami hotels with cruise shuttles here. We also have a number of hotels near the port with shuttles below. If you plan to stay in a hotel the night before, booking one with a shuttle to the port is a smart idea.

For more details about these hotels, we’ve linked to them on Kayak. If a package is required, you might have to book directly with the hotel.

One thing to note is that we know of no hotels in Fort Lauderdale with shuttles to the Port of Miami. The distance is simply too far for them to offer service.

If you have already booked a hotel in the Miami, give them a call and see if they offer a shuttle to the port.

If you are going from the Miami airport to the cruise terminal, taxis charge a $27 flat-rate fee. That’s based on the ride, not per person. So if you are traveling with a family of four, that’s about $7 per person (or $14 round-trip) — a decent deal. As well, unlike shuttles, taxis leave whenever you’re ready. There is no waiting for other passengers.

Taxis do offer convenience in that they are already there at the airport and waiting to offer a ride whenever you arrive.

Many of the cruise lines offer transfer service from the Miami and Fort Lauderdale airports to the cruise terminals.

Carnival, for example, offers a shuttle from the Miami airport to your cruise for around $21 one-way/$42 round trip per person. The same shuttle runs about $35 one-way/$70 round-trip per person from the Fort Lauderdale airport.

Cruise line transfers offer convenience, but we also find they can be expensive and restrictive. For instance, many are only available on the day you cruise and the day you depart. So if you’re flying in the day before, then a transfer from the cruise line won’t work.

As well, prices are per person. A family of four taking the Carnival transfer from the Miami airport would pay more than $160 round trip, despite the trip only taking about 10-15 minutes each way.

That’s why we suggest finding alternate ways to the port.

If you are still interested in cruise transfers, you can call your cruise line for more information.

Independent Shuttles to the Port In addition to the cruise line shuttles, there are independent shuttles that can get you to and from the port. The difference? They can be much cheaper.

Depending on where you’re coming from, expect the cost to run about $10-25 per person, each way. Obviously it is cheaper to go from the Miami airport compared to Fort Lauderdale because of the distance. There are often discounts for additional passengers.

While rates are pretty low, if you are traveling in a group of three or more, we’d suggest a taxi or Uber/Lyft as they will be comparable in cost but give you a private ride.

We can’t list every shuttle service here as there are quite a few of them. Note that we don’t recommend or suggest against any particular company as we haven’t used them. All of the following, however, can give you a good start for your search.

Some people simply like to go in style. In a place like Miami, that’s easy to do. There are dozens of car services in the area that will pick you up in a private car or limo. In fact, many of the same companies that provide shared shuttle service also have private car service too.

Of course, this service is typically a little pricier. But if you’re splitting the cost among four or more passengers, it can be surprisingly affordable.

We don’t recommend or discourage any of the following car services (we’ve never used them), but provide them as a starting point for you to see what’s available.

Despite its reputation as a car-centric area, South Florida does offer public transportation. If you are ok navigating what might be an unfamiliar transit system, it can be a cheap way to get between the Miami and Fort Lauderdale airports to the cruise port.

We have full details of how to use public transport to the cruise terminals here. The general directions and prices are as follows…

As you can see, while it is cheap (less than $3 if flying into Miami) the public transportation takes some time and at least one transfer to get to the port. For that reason, we recommend other methods for those unfamiliar with the area.

However, we’ve personally done this route from the Miami airport to the cruise port and it was fairly simple. Note that the trolley drop off at the port is a considerable distance from Terminals A & B (Royal Caribbean and Norwegian) and will require a decent walk.

More on Cruising From Miami

Miami Hotels with Cruise Shuttles — Staying in Miami before your cruise? These area hotels offer shuttles to the port.

Miami Cruise Parking — Parking at the port? We’ve got you covered with all your parking options, including costs and discounts.

Miami Park and Cruise Hotels — If you plan to stay in Miami the night before your cruise, look at this list of hotels that offer cruise parking with a one-night stay.

25+ Miami Hotels Near the Cruise Port With Shuttles (Free & Paid)

Which Airport Should You Fly for a Florida Cruise?

Looking for a hotel with a shuttle to the Port of Miami? Many area hotels offer guests a ride to the cruise port. Click here to read our full article on Miami hotels with cruise shuttles.

Driving to the port? As a perk, some hotels in Miami offer parking deals while you cruise in exchange for a night’s stay. Click here to read our full list of Miami hotels with parking packages. 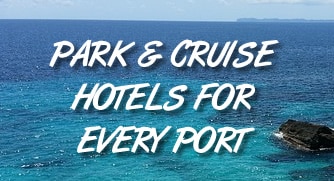 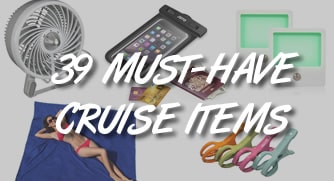