Nobody goes on a cruise to watch television. But, that doesn’t mean you won’t watch some of the tube while you are on vacation.

Whether you hope to see your can’t-miss show while you’re on vacation, want to watch the game, or simply want to relax by watching a movie, there are all sorts of reasons that you may want to know more about TV on a cruise. 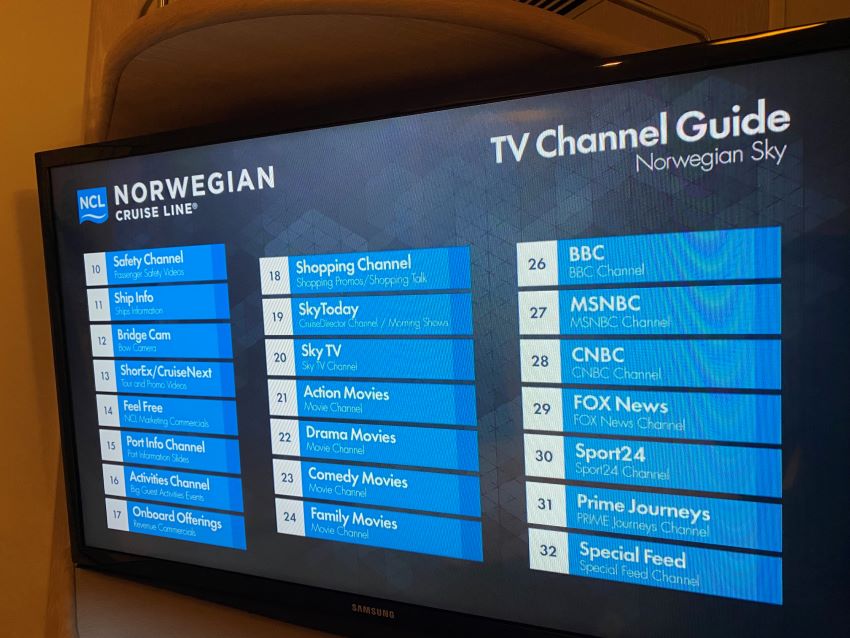 That’s why we’ve aimed to answer any question you might have about watching while you are sailing. Here’s what to know.

Does My Cruise Cabin Have a TV?

First things first, just like any hotel you’d go and visit, your cruise cabin will have a television. Don’t expect some big screen or anything. It’s typically a moderately-sized (32 inch) flat-screen TV. We’ve seen some that are just attached to the wall and angled at the bed and others that are on a swivel arm that can come out and face just about any direction. It may not be fancy, but for the short time on a cruise ship, it’s adequate.

What TV Channels Are on the Cruise?

Where you’ll find the biggest surprise is with the available stations. First things first, the channels available will vary based on the cruise line. However, in our experience, the best way to describe the lineup on any cruise is “limited.”

First, there won’t be that many channels — a couple of dozen at most. Of those, many will be related to the cruise, such as a channel showing the ship’s location on a map, or one showing events from onboard. There are some traditional TV channels, and you’ll often find channels showing movies on loops.

To give you an idea, here is a channel lineup from a recent Carnival cruise:

And a lineup from a recent Norwegian Cruise Line trip:

Can I Watch Sports on the Cruise?

If you’re sailing during the fall, then you may be on the cruise ship while there’s a big football game you want to watch. Or maybe you want to watch some other event. As you can see, ESPN isn’t featured on the lineups of NCL or Carnival. On Royal Caribbean, ESPN is available, but it’s an international version. Nor are major networks like CBS or NBC.

The good news is that big sports events will be available to watch on the ship. Sometimes they are played in the cabin via your TV on the sports channel if one is available. If not, then you will be able to watch somewhere around the ship, whether it be a TV in a sports bar or a casino on the ship or somewhere else.

Cruise lines know that people want to watch major sporting events and will ensure they are shown somewhere.

Can I Watch Netflix, Disney, HULU, ESPN+ or Stream Other Services?

We’ve covered that stations can be limited. And while big sporting events are shown, many “middle of the road” games won’t be available. So can you stream a game live from the ship? What about streaming a program that you are bingeing?

Yes, you can stream on a cruise ship. Just know that it can be expensive.

Cruise lines offer several different levels of Internet service, ranging from low-tier plans that only allow things like social media to the highest speeds available and full online access. These highest tiers typically allow you to also stream services (including sometimes when the cruise line may officially say that they don’t support the feature).

These top plans can be pricey at between $20-30 per day, depending on the cruise line. On a week-long cruise, you can literally spend hundreds of Internet access.

One thing to keep in mind as well is that while online access is improving, it is still the Internet in the middle of the ocean. There are times where connections can be slow, which makes it harder to stream. Even so, streaming is possible on most major cruise lines.

Are There On-Demand Shows and Movies?

One way that you can have a few more options on what to watch is with on-demand programs. Here, you can select through a menu of shows or movies and find something that you want to watch, similar to when you are on an airplane.

However, not every ship will have this. We’ve found that newer (or refurbished ships) often have interactive TVs that offer traditional channels, but also things like on-demand, account services and more. Older ships usually have just regular TV.

One more thing is that on-demand viewing is usually a charge. So it might be $5-10 to watch a movie from the room.

Can I Hook Video Games Up to the Cabin TV?

If you’re traveling with kids/teens (or you’re just a gamer yourself), then you might be wondering about the ability to hook up your system to the cabin TV to allow yourself a screen to play.

From what we’ve heard, it can be hit or miss. All the cabin TVs will have USB or HDMI ports available. However, we’ve heard from both sides — those who have had success plugging in and playing and those who have said the ports are disabled. Even if you do plug in, then there’s also the hurdle of changing the TV source over to the ports, which isn’t always available.

In our opinion, the best thing to do is plan for them not to work in your cabin. This is where gaming systems like the Nintendo Switch can be handy as they come with their own screen.

Worth It? Everything About Cruise Line Drink Packages