Can I use a birth certificate to cruise? Do I have to get a passport?

Frankly, the rules around the documents you need to set sail can get confusing. We are here to lay them all out in plain English.

First things first, if you are leaving the United States on a cruise, be prepared. Traveling abroad means you need some sort of identification — not only for getting into a foreign country, but also for getting back into the United States. These documents aren’t just to tell who you are, it’s also to prove your citizenship.

For many people, this identification is a passport. Getting a passport is by far the simplest way to have the needed citizenship identification to travel to and from the United States. That’s why we recommend everyone cruise with one (as do Customs and Border Patrol agents we’ve spoken with).

However, if you are on a tight schedule, a passport may not be feasible. Routine processing for a new passport is currently 8-11 weeks. If you pay to expedite the process, it can be 5-7 weeks.

Then there is the expense. A first-time passport holder can expect to spend a minimum of $165 to get a passport. The costs can rise when you include photos and expediting the process should you need a new passport quickly.

The good news? You don’t have to hold a passport to go on most cruises from the United States if you’re an American citizen. Instead, your birth certificate and government-issued identification is all that’s needed.

Most cruises operate as “closed-loop” cruises. Put simply, closed-loop cruises are those that begin and end at the same port. So if your trip departs Miami, sails the Caribbean (including stopping at a foreign port) and returns to Miami at the end of the trip, it’s considered a closed loop.

With closed-loop cruises that head to The Bahamas and Caribbean, you aren’t usually required to have a passport to return to the United States. Instead, you can return with just a birth certificate and a government-issued ID, such as a driver’s license. (Just to be sure, it’s a good idea to confirm with your cruise line well in advance.)

If, however, your cruise doesn’t begin and end at the same port (e.g. sails from New York, stops at a foreign port, and then ends in Miami), then you’ll have to use a passport.

While it might seem simple at first blush, there are actually some good questions that come up when talking about using your birth certificate for a cruise.

For example, does the document have to be notarized? Or can you use a copy of your birth certificate instead of the original?

We answer these questions and more below… 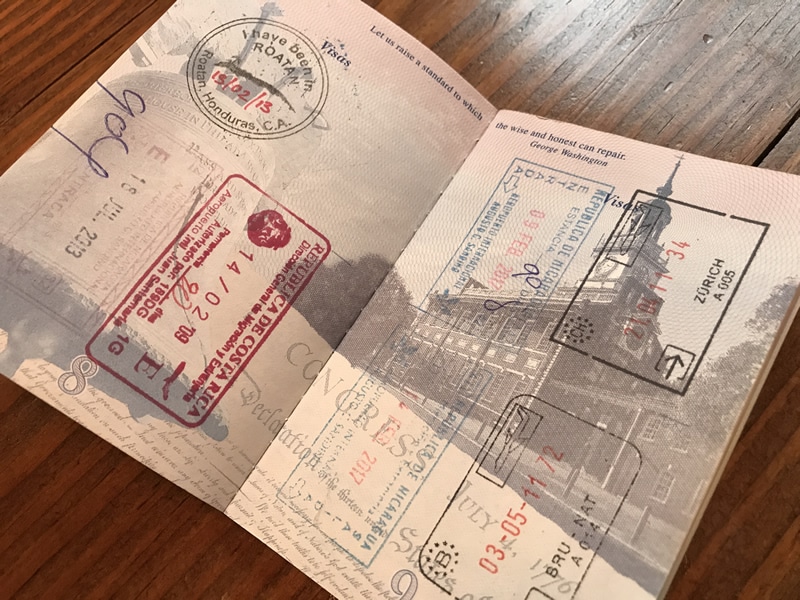 What Do I Need To Cruise If I Don’t Have A Passport?

As mentioned above, if you are a U.S. citizen taking a closed loop-cruise, then you can usually travel using a birth certificate and a non-expired government-issued ID with photo, name, and date of birth (if over 16 years old). This is usually a driver’s license or government-issued ID card.

There are some exceptions, however.

You might have heard about Enhanced Driver’s License (EDL). This is a special type of driver’s license that has a proof of citizenship component. Currently it’s only available from a handful of states (Michigan, Minnesota, New York, Vermont, and Washington).

According to U.S. Customs and Border Protection, if you have one of these, it can act as your proof of citizenship/ID for a cruise, and you don’t need your birth certificate.

Keep in mind that the Enhanced Driver’s License is different from a REAL ID that all states are switching to due to federal rules. Driver’s licenses that comply with REAL ID rules can’t be used for proof of citizenship.

If you aren’t sure if you have an Enhanced Driver’s License or a REAL ID, then just pack your birth certificate to be safe.

Does My Birth Certificate Have To Be An Original?

No. The birth certificate can be an original or an official copy. However, for copies we would recommend you have a copy issued by the local health and vital statistics department. In other words, you don’t want to just make a photocopy of your actual birth certificate and use that to board the cruise (although some lines do allow that).

If you no longer have your birth certificate, you can get in touch with the city or county you were born to get a certified official copy to use on your cruise.

Does My Birth Certificate Have To Be Notarized Or Certified To Cruise? It depends on the cruise line. For instance, Carnival states that a copy of the birth certificate doesn’t need to be notarized or certified while Royal Caribbean says that “all documents must be original or a notarized copy.”

For cruising purposes, we recommend your birth certificate be a notarized copy with some sort of official seal. This can help ensure there are no issues getting back into the country.

If your birth certificate looks like something that a person could make at a local copy shop, then it could raise questions on its validity.

Will The Hospital Birth Certificate Work For A Cruise?

No. The birth certificate must be one issued by a local or state government. If you have a hospital birth certificate (so called “baby feet” certificate), it will not work. Remember — you want something that’s officially issued by the city, county, or state as this will be used to prove your citizenship.

What If My Name Has Changed From My Birth Certificate?

If you’ve had a name change (for example, you changed your name once married) to where it doesn’t match your birth certificate, then you will need to also bring along some proof of the name change.

This can be a marriage license (again, the original or a notarized copy is best) or if you’ve had a name change unrelated to marriage, your documents that prove the change.

What If I Don’t Know Where My Birth Certificate Is?

Lost your birth certificate? Don’t worry, it’s common. You can contact the city or county of your birth and follow procedures to get a new one. There’s usually a small fee, but it’s considerably cheaper and faster than getting a passport.

What we actually suggest if you have the time and money, is to get your birth certificate and then turn around and use that to get your passport. That way you’ll have the passport for your upcoming cruise.

Do I Have To Have Identification In Addition To The Birth Certificate?

Yes, as mentioned above, you must have a government-issued ID with your name, photo, and date of birth. It must not be expired. This is only required of passengers 16 years or older. The best idea is just to use your driver’s license.

One thing to keep in mind is the change in rules around ID. Starting May 2023, driver’s licenses need to comply with federal rules called REAL ID. After that date you’ll need an ID that complies. This is usually shown with a gold star on the issued license.

You can see more about the requirements on the USCBP website here.

What About Kids? Do They Need Birth Certificates?

Yes. If you are sailing with kids (even babies), then they will need a birth certificate to leave and re-enter the country.

One thing to know is that kids under 16 don’t have to show any identification. The ID requirement only applies to those older than 16 years.

Do I Show My Birth Certificate When I Get On And Off The Ship in Port?

No. The only time you’ll need to show your birth certificate is during the boarding check-in process and when you leave the ship as you arrive back home. Apart from that, you should keep it secure in your cabin safe.

When you get off and on the ship in ports of call, you’ll just need to have your ID and your cabin keycard. The cruise ship takes care of the immigration process for passengers arriving in a foreign port. You just get to come and go as you please.

Why Is Having A Passport Better Than Cruising With a Birth Certificate?

The rules around identification, and birth certificates for a cruise can get complicated. It’s far easier just to have a passport, which serves as the only citizenship document you need.

Finally, many ports (such as Port Canaveral) have moved toward faster screening of passengers with passports. On a recent cruise, those with passports simply took an “exit” photo as they left the cruise terminal and were on their way out of the building immediately.

Those with birth certificates had to wait in a 30-minute line to have their documents checked by an agent before being allowed to leave. So not only is a passport more flexible, it could get you off the ship and back home faster.