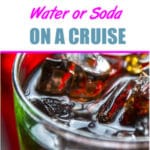 Interested in cruise line rules about bringing water, soda, and other non-alcoholic beverages aboard? Most people look forward to a cruise’s adult libations — an umbrella drink in one hand can mysteriously put anyone in a better mood. But that doesn’t mean you only want to drink booze for a week. And while water, juice, and tea are usually free on a cruise, you often have to go to the ship’s restaurants to get them. Non-alcoholic drinks like sodas cost extra (usually around $2-3 per serving), so bringing those on with you when allowed can save you a decent amount.

Plus, you might have a favorite non-alcoholic drink that the cruise doesn’t normally serve (or perhaps you simply want a mixer for that little bit of liquor you snuck onboard).

So can you bring water, soda or other drinks on your cruise? The answer depends on which line you sail, but in many cases it is allowed.

Below, we’ve researched the policies for each major cruise line.

Carnival is fairly liberal with their beverage policy. According to their website, “On embarkation day, a small quantity of non-alcoholic beverages (i.e., sparkling water, sodas, energy drinks, juice, and milk), packaged in cans or cartons, may be brought on board and must be in the guest’s carry-on luggage. A small quantity is considered a maximum of 12 sealed, unopened cans/cartons of 12 ounces each or less, per person.”

Given that most people sail with two people to a room, that means you can bring 24 bottles of anything you want. Just be sure that it is not in a bottle.

With the prices of beverages on the cruise (around $2-4 per non-alcoholic drink), that can save you a lot of money.

One tip: If you want to have water to drink, it’s harder to find in cans or cartons, and Carnival doesn’t allow bottles to be brought aboard. In that case, you can order a 12-pack of bottled water to be delivered to your cabin for about $5. That’s much easier than carrying it on with you.

Royal Caribbean used to be strict and straightforward about bringing beverages on the ship. It was never allowed. However, now Royal Caribbean has a more lenient policy.

One thing to note is that unlike Carnival, that means Royal Caribbean allows bottles and slightly larger containers.

Princess does not specifically outline its policy for bringing aboard non-alcoholic beverages. For instance, while “alcohol in violation of the company alcohol policy” is specifically mentioned as prohibited, there’s no mention of non-alcoholic drinks like water or soda.

If you have a case or two of your favorite drink, then simply bring it aboard. In fact, Princess’ website mentions you can bring small coolers (12″x 12″ x 12″ in size) that hold “6-12 cans non-alcoholic beverages,” implying that it’s perfectly fine to bring them onboard.

Norwegian used to have a policy that allowed you to bring drinks aboard with you when you boarded the ship. Now that’s changed and beverages aren’t allowed when boarding.

According to the website: “Effective for sailings July 15, 2016 and beyond, guests are prohibited from bringing any beverages — including liquor, beer and non-alcoholic drinks such as water, soda and juices — on board either as carry-on or checked luggage.”

The only exception is that purified or distilled water in sealed containers for medical devices like CPAPs or baby formula are OK, but you do need to contact the cruise line ahead of time to verify an exception.

Unfortunately, that means you’ll have to leave your soda at home.

Disney doesn’t specifically point out non-alcoholic beverages as not being allowed on their website, but they also aren’t mentioned them as being prohibited either.

One thing to know is that soda and water are available on the ship at no charge if you get them from the beverage stations on board (one of the few cruise lines with free soda), Still, many people want to bring their own favorite beverage.

In that case, you can bring your own, but soda and water should be unopened and brought in your carry-on luggage, NOT in your checked suitcases. We haven’t found any specific limits on how much you can bring aboard, but we would suggest being reasonable and only bring a case or less.

As a sister cruise line to Royal Caribbean (they are owned by the same parent company), you would think that Celebrity would have a similar beverage policy.

However, an update to their list of “What Not to Pack” includes a specific mention of both “alcoholic and non-alcoholic beverages”. Therefore, we’d suggest leaving those drinks at home.

MSC is a global cruise line, and it’s ramping up quickly in the United States. According to their list of “Items Forbidden Onboard,” guests are not allowed to bring drinks on with them when boarding.:

“In the interest of health and safety, beverages and food (including partially eaten or home cooked items) may not be brought on board either. Exception: dry, packaged and commercially produced foods.”

Bringing Water for Medical Use or Formula

Not everyone that wants to bring on a liquid want it to drink. Some need to bring on water for medical purposes, such as use of distilled water to use with a CPAP at night or to mix with baby formula.

If you want to bring something for a medical purpose, it’s a good idea to call the cruise line before your trip and ask about their policy. Obviously if they allow you to bring on water as a general rule, then it won’t be an issue. If they don’t allow you to bring beverages, then you might find they make an exception for medical use, or they can supply what you need on the ship.

What Happens If I Bring Water/Soda and It’s Not Allowed?

So what will happen if you bring on a non-alcoholic drink and it’s not allowed? For instance, some cruise lines have specific rules regarding container size or type.

Don’t worry, you won’t be arrested or denied boarding. If you bring a non-alcoholic beverage that’s not allowed, at worst, the security staff may confiscate it. There’s also a chance that they don’t even notice the drinks or care.

We’d still suggest following the guidelines set out by the cruise line, just to make things as easy as possible.

For more on what sort of alcoholic drinks you can bring on a ship, visit this link. Can I Get Off a Cruise Early in Another Port? (Partial Cruises)